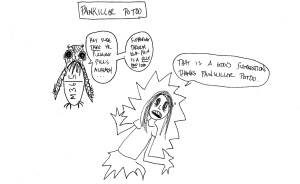 [Description: Line drawing of a Potoo bird with its lower body shaped like a tablet; the tablet reads “M365.” To the bottom right of the Potoo is the cartoonist, grimacing in obvious pain. The two are having a conversation:

Annaham: That is a good suggestion; thanks, Painkiller Potoo.] 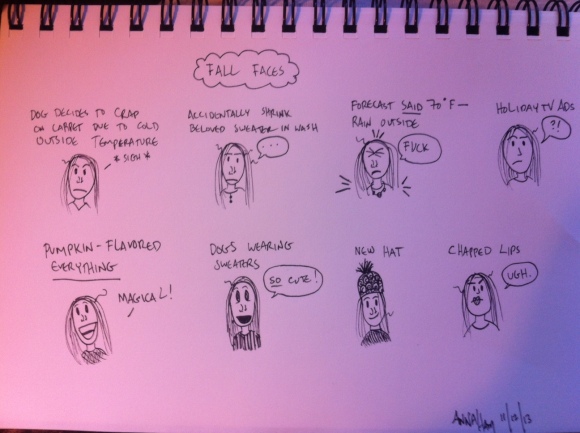 I have no idea what’s going on with the light in this one, but I liked the pink and purple so much that I kept it.

like being on the surface of the sun (now with alt text!)

[Description: Two-panel line drawing of a rainstorm. In the first panel, text on top reads “Other people see rain…”; the accompanying illustration shows a happy person wearing a raincoat and saying “Good thing I have my raincoat!” The second panel has top text as well, which reads “I see rain…”, and this panel’s illustration shows the cartoonist standing in the same rainstorm, with knives of varying sizes replacing raindrops. The cartoonist’s speech bubble reads “SHIT” as straight lines on both of her shoulders signify intense pain.]

I had the opportunity to view Francis Bacon’s 1954 painting Figure With Meat at the Art Institute of Chicago recently, and the experience made me realize that I’ve never done a post about the artist on this blog (among other things)! Below are some of my favorite Bacon works; what I love most about Bacon’s work is the willingness to show aspects of the human body–and certain facets of human experience, such as physical pain–that most people would rather not see. Like Frida Kahlo’s art, Bacon’s paintings can be hard to view because they so vividly portray bodies that don’t work the way they “should,” and many of his rather grotesque art speaks to me for that reason. And what other artist consistently portrays the body as simultaneously beautiful, painful…and sort of (I don’t know how else to put this) meat-like. Sometimes, I am reminded of the Body Worlds traveling exhibit when I look at these; other times, I am reminded of NIN’s (in)famous (and very, very NSFW) video for 1994’s “Closer” (check out 1:34 in, where Trent Reznor stands in front of a cleaved beef carcass, and then refer to “Figure With Meat” below).

From the biographical material I have read about Bacon, I know that he probably did not have chronic pain issues, but looking at some of these paintings as a person with a body in pain (thanks, Elaine Scarry) remains a powerful experience.

Figure With Meat, 1954 (depicts a person sitting in a chair in front of a split beef carcass, screaming) 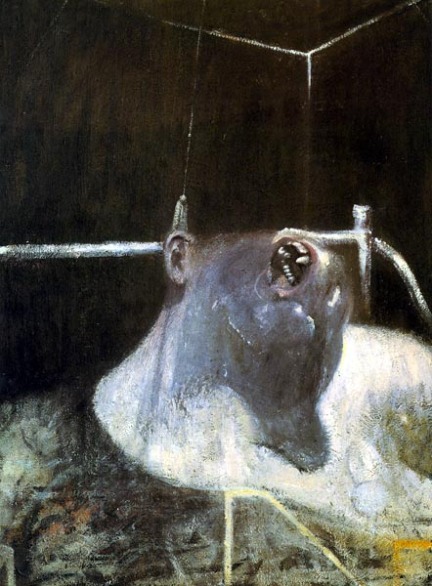 Head ii, 1947 (depicts a seated figure with a globular head and mouth with fangs) 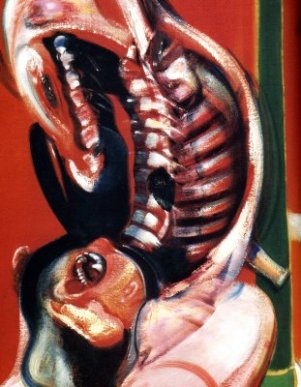 Detail from second painting of Crucifixion triptych, 1965 (depicts a hanging carcass in side-view against an orange wall)

Two Figures, 1953 (depicts two figures doing something on a bed)

This is what I have been doing since my last update

Here is a quick sketch of me buried beneath a pile of job applications. Fun!

I have some other cartoons on similar topics that I am eager to post, so I’ll get those uploaded soon.

Hi, readers! I know I’ve been neglecting ye olde blog (and hopefully I will start to do better on the whole “updating it regularly” thing soon!), but I wanted to draw your attention to a couple of things in which I have been involved lately:

Last week, I wrote a guest post for Tiger Beatdown on Lars von Trier’s 2009 film Antichrist, and how it relates to the pop cultural depiction (or lack thereof) of depression and pain, women and emotion, plus the unintended backlash that the expectation of “strong lady characters” has wrought. Go and join the discussion if you feel so inclined. Content warning for discussions of some graphic violence that the film depicts.

s.e. smith and I recently wrote an article (on disability culture on the internets and online feminism, naturally) for the latest print issue of Bitch Magazine, which is currently available for purchase or download. I also did the illustrations, which is kind of (read: EXTREMELY) exciting for me. We were interviewed at length by Kjerstin for the Bitch Radio podcast as well. Hooray!

[Description: Four-panel cartoon; first panel is labeled “Self-Perception and features a line drawing of Annaham happily gobbling pills while excitedly saying “PILLS!”; the other three panels come under a heading that reads “Reality.” The second panel features Annaham grasping a bottle of pills in one hand and a single pill in the other; a thought bubble reads, “If I take this for pain, does that mean I’m an addict?” The third panel depicts Annaham with a worried/pained look on her face, plus a thought bubble that reads “OH FUCK.” The fourth panel pictures Annaham lying on the ground in obvious pain as tears flow from her eyes. A thought bubble reads, “If I take pills, I will become addicted. WILLPOWER.” The text at the bottom right of this image reads “5 minutes later.”]

Variation on a theme. Click for a higher-quality version; I’m not sure why WordPress shows the image as horribly pixelated and I can’t seem to fix it.

[Image description: Line drawing of Annaham holding a hot heating pad in her hands and looking confused as question marks surround her. Text: “Chronic pain conundrum: Everything hurts — where to put the heating pad first?”]