Rating Holiday Albums Based on the Covers, part 2

This feature has been divided into two posts, since the first one was getting a bit long. You can view part one here. So, continuing with making silly comments about holiday albums! I know, Christmas was yesterday, but why not keep the momentum going?

This is your blue-grey toned Photoshop filter on “Unrecognizable” mode.

I’m totally coveting her hat. The rest of it (including the weird font), not so much.

James Taylor looks quite nicely dressed up for Winter. Too bad he seems to be standing indoors, in front of a wall made of feces.

There are times when words and/or speech disappear for me, and this is one of those times. Also, I can’t help but notice how there is a present directly above HiDu’s head. I don’t think she’ll be quite as happy when it falls from the sky. Is she able to make gifts levitate magically? This remains unexplained.

I had no idea that Glamor Shots was still around.

This is Bright Eyes’ Christmas contribution, which is so morose-looking that I now have an incredible urge to buy it.

I want to buy this one, too, but for different reasons. Dolly Parton, you are my favorite implant-sporting woman.

Christmas is the biggest sepia season of the year! Is there a reason why Celine appears to be smelling this package?

Someone got a little excited with the Photoshop on this one. Is it just me, or does Josh Groban look like he’s all, “I’M STEALING YOUR SOOOOOOUL” instead of smiling coyly?

All I want for Christmas is for album cover designers to stop using computer graphics for nefarious purposes, such as putting little Santa hats on cover photos.

There are three of these?

Billy Gilman: I, TOO, AM STEALING YOUR SOOOOOOUL.

Merry Christmas! You get…I kind of don’t know what is going on here.

No, that’s not phallic at all.

I hope whomever designed this was severely reprimanded, both for making the normally lovely KT Tunstall look jaundiced, and for sticking her in a short-sleeved top OUT IN THE MIDDLE OF A FUCKING TUNDRA (or implying it, using the magic of cut n’paste). And then having the audacity to slap a bow onto such an atrocity.

I hope all of you who celebrate the holidays had a lovely time, and in case you didn’t get what you want this year, take heart: a Justin Bieber holiday album can’t be far behind.

Maybe Not Quite The Worst Album of All Time: A Short Review of Lulu (2011)

Hi, folks! You may have noticed that I have not been around the blogging world as of late; the primary reason for this is because I am finishing my Master’s thesis and have not had much time to blog about anything important. Continuing this trend, here is a short review of one of the most polarizing albums of the year, the Lou Reed and Metallica collaboration Lulu. It is available as a two-disc album as well as a (rather perplexing) $120 special edition box set.

First, a disclaimer: I did not have high expectations for this album at all. Since I am probably one of the comparatively few people who still follows Lou Reed’s current output (un-ironically, I swear) and who also really, really liked 2003’s The Raven (because where the hell else are you going to get Lou Reed and Antony Hegarty collaborating on anything, and both Steve Buscemi and Willem Dafoe READING SELECTIONS FROM EDGAR ALLEN POE’S WORKS[!] on one record?), I was eager to at least give this collaboration a chance. I suspected that it would either be the best record of the year (HA), or the worst. 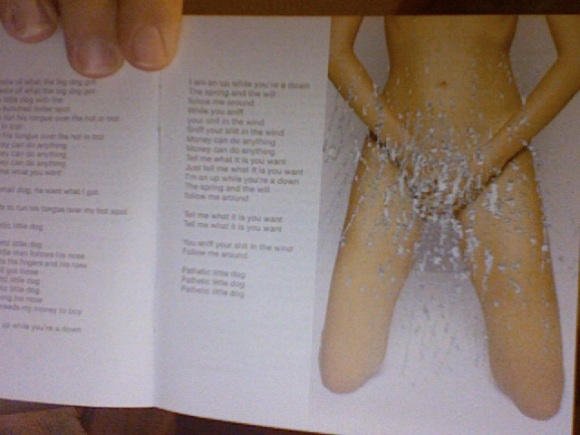 (The jury is still out on whether the album art is the worst of all time, however.)

There are a lot of things to pick at here: the ramrod guitar-bass-drum combo rockers that go on for six minutes; James Hetfield’s unfortunate backing vocals in many of the songs, which seem to signal that he is trying too hard; the creepiness of hearing a man who is nearing 70 years of age say, with apparent seriousness, “I am your little girl” (that would be from “Mistress Dread”; I know it’s a concept album, but come on); the fact  every song on the first disc could have been cut by a minute or so without any detrimental effect to the overall flow of the album.

However, there are a couple of songs that are at least listenable, if not great. “Iced Honey” is a fairly catchy, if somewhat standard, rock song. “Little Dog” is not terrible, either, save for the mention of the titular dog’s penis for no apparent reason. The album’s final track, “Junior Dad” is twenty minutes long and, strangely, is probably the best track on the album. Its length–and its interesting instrumental work–distinguish it from most of Lulu, if only because it is not (for the most part) yet another six-minute hard rock track that prominently features Lou Reed’s poetry read in a monotone and James Hetfield’s awkward backing vocals in all the wrong places. One wonders whether Lulu would still be a spectacular failure if Metallica and Reed had taken things in a more “Junior Dad”-esque direction. I think it would be a much better album if this were the case, but despite the album’s failures, I cannot call Lulu the worst album of all time.

No, my pick for the worst album of all time is still Pat Boone’s In a Metal Mood: No More Mr. Nice Guy, which is an odd, somewhat overproduced collection of metal and rock covers from the conservative Christian crooner. It’s sort of like an alternate-universe version of the oeuvre of Richard Cheese and Lounge Against the Machine, except Boone is — as far as I can tell — totally serious, whereas Richard Cheese and LAtM works really well because the audience is in on the joke. It seems that Reed and the members of Metallica are serious about Lulu also, but at least Lulu has a few things going for it (even if one of those things is TWENTY MINUTES LONG). You can tell that Reed and Metallica enjoyed making this record — even if the end result never quite comes together as a coherent concept album, or reaches the level of transcendent godawfulness that many of us expected. Maybe it’s one of those records where you either get it or you don’t. I, for the most part, don’t.

[Description: Cover of Charlotte Martin’s album Dancing on Needles, which depicts Martin, shown in profile, in some sort of woodsy outdoor environment. She appears to be looking up at something out-of-frame.]

When I first started hearing about Charlotte Martin’s album Dancing on Needles in some preliminary press coverage last year, I was both excited to hear the album and more than a bit skeptical when it came to the tone of some of the coverage. Some of this coverage focused on the fact that Martin’s new record had been inspired by her battle with severe chronic nerve pain, and the apparent “happy ending” to her story; as someone with chronic pain, it seems to me that this type of narrative is often trotted out in order to reassure the audience that the subject is “better now”–even though that’s not the way it works out for most folks with chronic pain. For many of us who deal with chronic pain issues, there is no “ending,” happy or not; chronic pain is, by its very definition, unending. Oddly, many narratives of disability in popular culture propose an end or accord some sort of “inspirational” power to a disabling health condition, often meant to reassure many nondisabled folks’ existing attitudes about disability.

Popular culture, at least in the United States, tends to engage with disability in ways that are both extremely limited and highly specific. There are a number of well-worn tropes about disability and ability that popular culture drags out time and time again, namely: Disability is always tragic and awful. Illness and/or disability can be turned into a 100% positive “opportunity” to discover what’s really important in life, or to teach the person with the disability or illness–and the nondisabled people around them–a crucial life lesson that they never would have learned if not for their illness/disability. Disabled people are freakish, abnormal, scary, and are thus not deserving of basic human treatment; they deserve only pity, charity, or to be gawked at. They are constantly angry about their lot in life (think of House, for example–even with all of the complexities that make him such an interesting character). They are just jealous of people who are normal because they themselves are not normal. People with disabilities can “overcome” their limitations, but only by doing amazing things that, above all, serve to inspire nondisabled people (what’s up, Supercrip)!

Dancing on Needles, thankfully, does none of the above. If you’re looking for a completely inspirational record, or one with easy answers, you may want to look elsewhere.

Charlotte Martin has made quite a few albums. I have heard almost all of them (exception: Piano Trees, which apparently was a tour-exclusive album and one that I haven’t been able to track down). They are all spectacular in their own ways, but this one might be my favorite, and not just because many of the songs are about dealing with chronic pain and the uncertainties that it poses. The entire album is a complex, layered work about dealing with chronic pain and its uncertainties. We have all seen works of art about disability that rely on one or more of the tropes and narratives listed above. To which I say, YAWN, because most of the aforementioned tropes and themes get excruciatingly boring after a while (not to mention overused), and then you have a lot of people thinking that those tropes are the only ways to engage with disability/ability in creative work, simply because those are the stories that have been used so often. Dancing on Needles does not fit into any of those narratives quite so easily, at least not with lyrics such as:

Great ideas/God, we had great ideas/Didn’t know this could happen to me/Struggling/To see the meaning in all of the meaningless/I wasted when I had you here (from “Life Vest”)

Of course, there are multiple ways to interpret the album’s lyrics, including those excerpted above, but since the album has been described repeatedly in articles and press materials as being inspired, in part, by Charlotte’s recent experiences with chronic pain, I’d be pretty surprised if at least some of the lyrics did not refer to it at all. Even if the lyrics are not straightforwardly about chronic pain throughout, all of the songs on this album add up to an incredibly interesting, rewarding record that seems, more generally, to be about life changes and the uncertainties that they pose. I’d argue (mostly from personal experience!) that chronic pain, and living with pain, can be and often is a major life change. Learning to live with pain entails some sort of change, usually; Dancing on Needles is a stunning example of how great art, and great music, can spring from tremendous life changes.

Musically, it is also a great pop album. I hope that this will not be the only pop record that features a first-person experience of disabling chronic pain as one of its main themes. Of course, it’s probably not going to completely revolutionize pop music and that genre’s treatment of disability, because it is one album. The important thing is that this album is a starting point, and one that has set the bar pretty high at that.