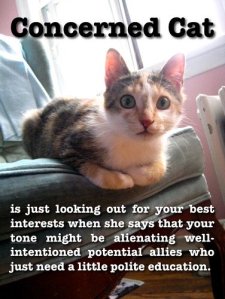 [Image via Tlönista in this comment thread at Flip Flopping Joy.]

One unfortunately common response to marginalized people saying that there’s a problem is the “Educate me NOW” demand from “well-intentioned allies” who totally mean well, but they just lack education on these issues and so just can’t understand what the fuss is all about.

I am using the following example not to appropriate from the awesome anti-racist work that Jessica Yee and the fabulous Racialicious crew (and countless bloggers around the web!) do on a daily basis, but rather for two specific reasons: 1.) I have already talked about my personal relationship with this oft-used derailing tactic rather extensively, and could probably talk about it ’til I’m blue in the face; 2.) anti-racist activism and disability activism are not completely separate, independent social justice strains — many of us who are involved in these activist projects are, in fact, fighting similar (though NOT completely analogous) battles. For me, claiming an identity as a feminist disability activist has entailed doing my best to fight racism and white privilege alongside fighting for disability rights. This is because disability and race intersect in many, many ways — sort of like how disability and gender, and race and gender, intersect. In other words, this is not just a disability issue, or a feminist issue,  or a trans* issue, or an anti-racist issue; it affects many of us in the social justice blogosphere, if in differing ways.

The “educate me now because I want to learn, marginalized person!” response played out, yet again, fairly recently in the comments to a post on Bitch authored by Indigenous activist and writer Jessica Yee. Jessica had written a post on white hipster/hippie appropriation of native dress and why it’s not only ridiculous, but racist. Makes sense, right? (If it doesn’t, you might be at the wrong blog. Or go read this. I don’t know.) Overall, this piece seems like it would fit right in on a website for a magazine that is dedicated to showcasing “feminist response[s] to pop culture.”

And then the comments started rolling in, and so did the “but you have a responsibility to educate people who mean well!” trope:

I’m sure this is in fact extremely annoying. However, you might consider that when people bring that up, they’re not saying, “Hey I’m just like you and I totally understand what you deal with,” they’re trying to make a connection and learn something. Ignorant people are a pain in the neck, but they’re mostly not trying to be ignorant on purpose.

I‘m merely suggesting that if this is a cause you deem worthy of championing, then you should have a prepared source of information for them—be it this blog, book titles, or documentaries. Encourage them to learn more about THEIR history and perhaps you’ll draw a new soldier to your army.

It seems somewhat contradictory to put stickers on your laptop that indicate a Mohawk heritage and then rudely dismiss a stranger who expresses an interest in your advertisement. Perhaps a better way to accomplish your agenda (whatever it is) would be to engage in polite and open-minded conversation with those who mistake your stickers for an invitation.

Thea Lim at Racialicious pretty much nailed it in her recent post on what went down, entitled “Some Basic Racist Ideas and some Rebuttals, & Why We Exist” (which I highly recommend that you read in full, by the way). An excerpt:

Anti-racism and people of colour organizing is not about being friendly, being appealing, or educating white folks. While individual anti-racist activists may take those tacks to achieve their goals, the point of anti-racism is to be for people of colour.

I completely agree with Thea here — and I believe something similar applies to disability activism. That is: Those of us with disabilities are not here to make abled people feel comfortable, to hold their hands as they have a Very Special Learning Experience (most often, it seems, at our expense), or to make them feel good about themselves. I, personally, don’t care how “good” your intentions are, or that you reallllllly wanna learn, or if you think I’m being mean by not dropping everything to educate you when you demand it.  While I definitely don’t want to speak for Jessica, Thea, or any of the Racialicious contributors — or for people of color who do anti-racist work — I suspect that they may feel similarly about white people who come into PoC, WoC or other anti-racist spaces and demand that whoever is doing the activist work must halt whatever discussion is going on and educate them, now, because they are good “liberal” white people and have such good intentions, and you PoC want white people like me as allies, right? And if you don’t drop everything and rush over to educate me, well, you’re just a big meanie who must not want my support after all (such “support” is often conditional, and based upon whether the marginalized person can make the non-marginalized feel comfortable at all times), or you just want an excuse to be racist toward white people! Or some other ridiculous thing.

For me personally, the willingness that I “should” have to help well-meaning folks learn is also an energy issue. I am a person with disabilities, several of which I have written about at length on this website — and one of which is a pain condition subject to flare-ups. Thus, I have to manage my time and energy extremely carefully. Having to explain basic concepts over and over again to strangers on the internet because they’ve deigned to tell me that they “want” to learn — and some of whom may think, by extension, that they are somehow entitled to my time and energy — takes work. Writing takes work; additionally, a lot of bloggers do the blogging and responding to comments thing for free, on their own time.

And sometimes, those of us with conditions that intersect with our ability to do this work end up burnt out, frustrated, or we lose our patience. Though these end results are often nothing personal, they might read like it, and we end up paying the price energy-wise only to have that person who realllllly wanted to learn petultantly respond with something like, “You must not want to educate me, then, if you’re not up to answering all of my questions!” and leaving in a huff. But they reallllly want to learn. . . that is, if someone else does the brunt of the work for them and/or gives them good-ally cookies for just wanting to be educated about all this social justice stuff. Merely wanting is not enough; you have to actually follow through for your good intentions to matter.

There is, thankfully, a solution to this problem: those people who say, or comment, that they realllly want to learn must take responsibility for their own learning. There are several ways that this can be accomplished, among them lurking on blogs for a while before one starts commenting, reading a site’s archives (and most sites have them!), picking up a book (or two), reading articles online or off. Certainly, there are a lot of things that are privileged about this assertion; of course, not everyone has the time to read about social justice, lurk on blogs, or take similar steps. But what is also privileged is the putting the responsibility for your own 101-type education onto someone else — someone who might not have all of the energy, time and patience that you might.